These mixed media pieces are on paper and were made around 1990. A suite of 18 developed as a visual response to my Vancouver environment. At the time I was living in Kitsilano about 5 blocks from the ocean. It was an almost daily routine for me to walk, run or cycle somewhere along the beach area. Assembled from sign shop scraps of vinyl, industrial paints and acrylic paint. I used place them in some inexpensive plexi box frames in a grouping of 6 (2 x 3). Now and then, I would rotate them for variety. 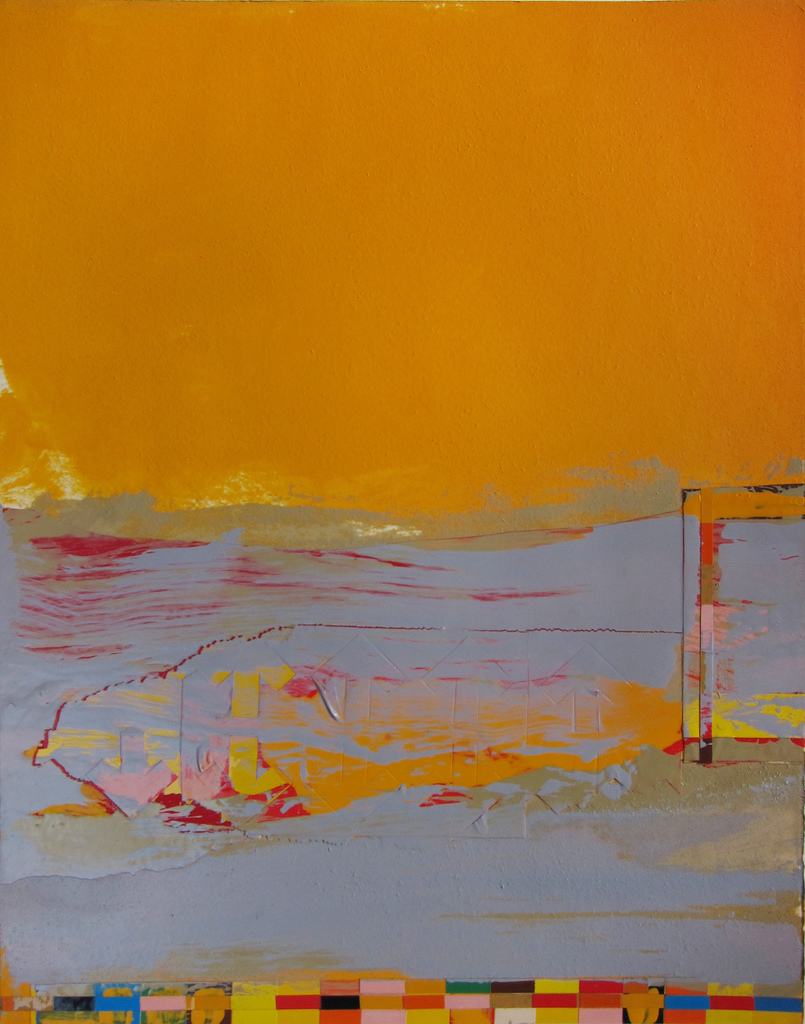 Digital collage is very different than the actual physical glueing of pieces ‘analogue-ically’. One actually has to make a conscious intent to slap the pieces together in such a way that the shock of incongruous juxtaposition will still be there. Its very easy to be seduced by the power of the tools to design. Not that there is anything wrong with a designed collage; its just that the surprise element can be lost. 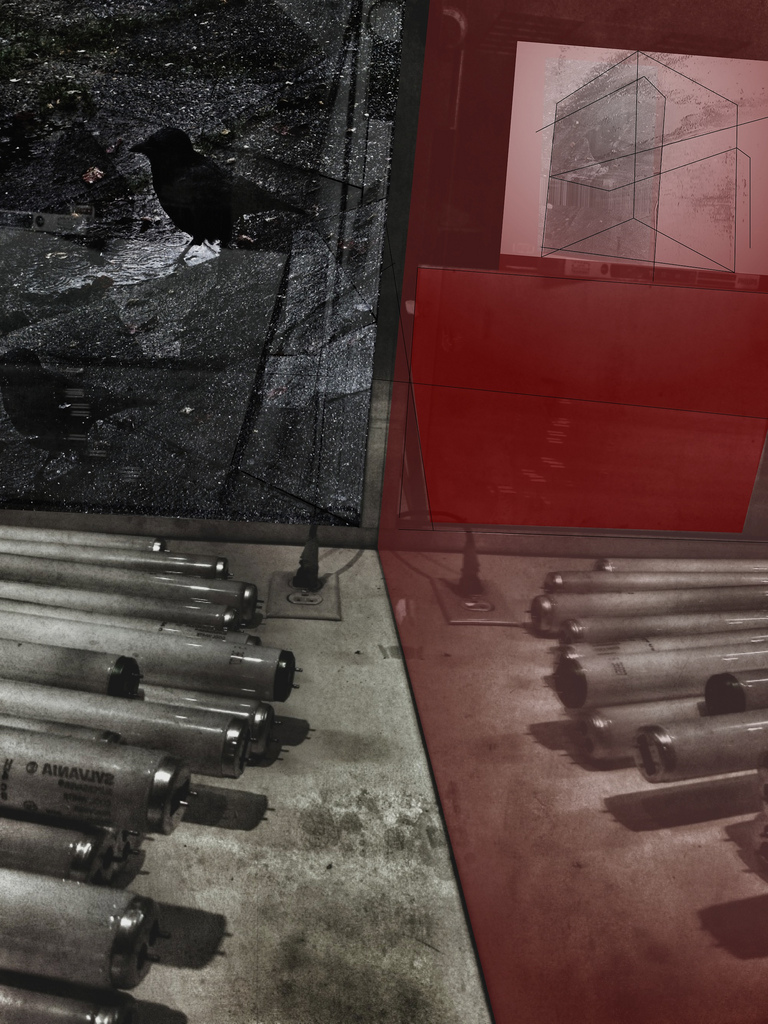 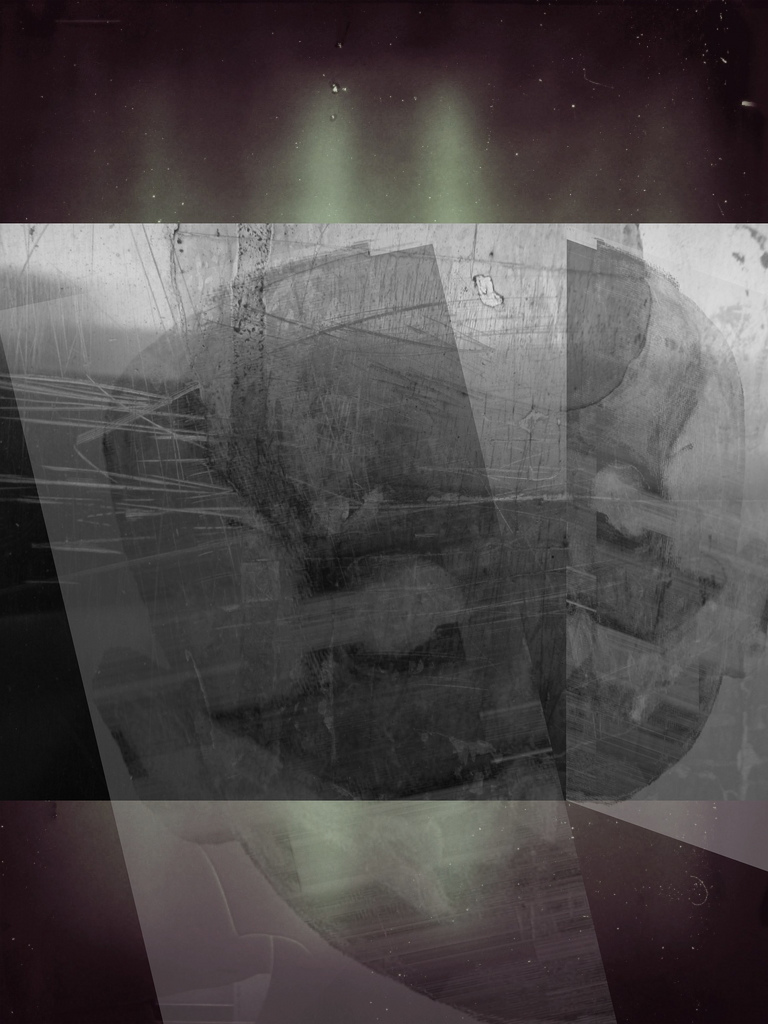 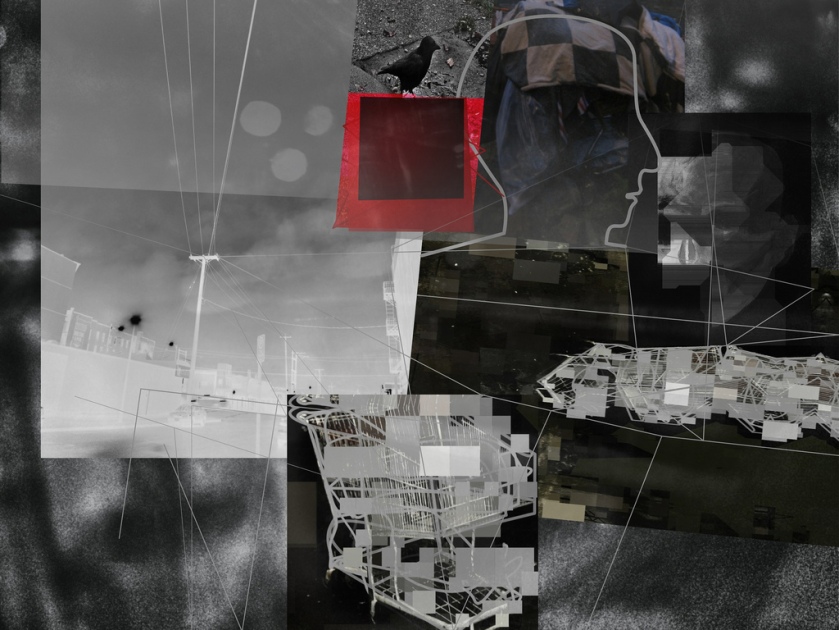 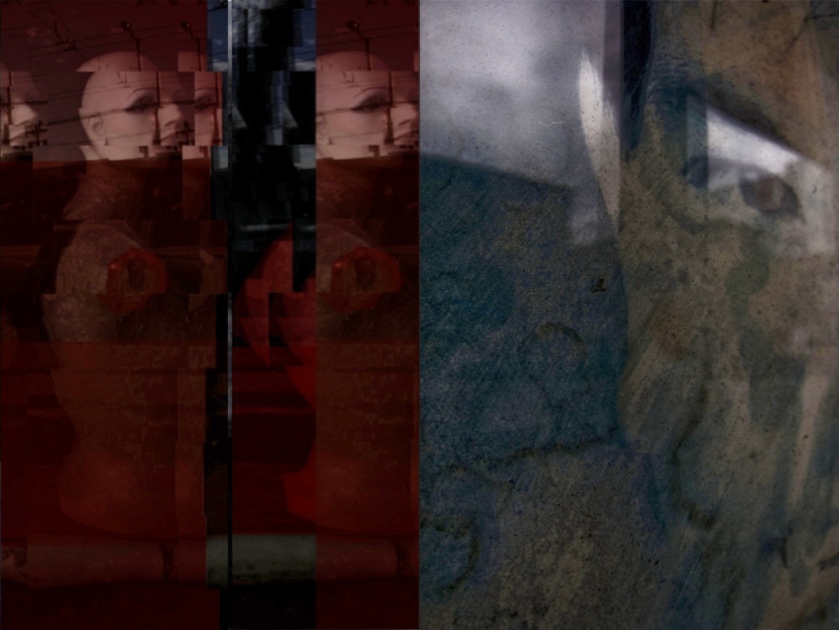 the man who lost his direction; digital collage 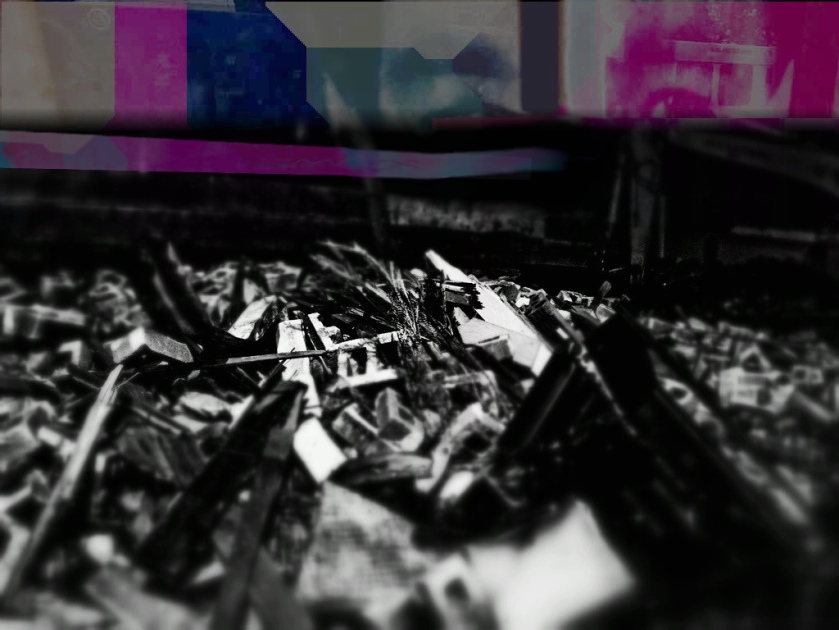 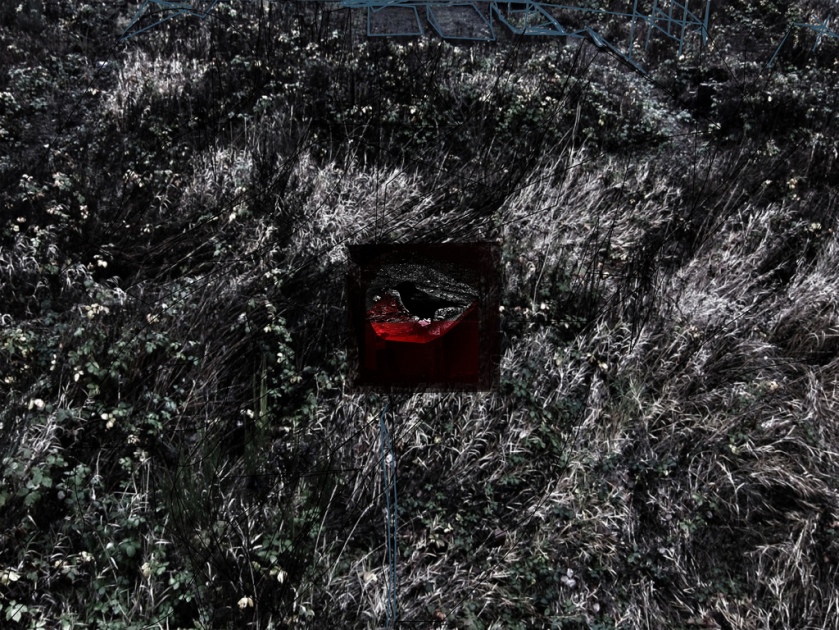 field for a crow; digital collage 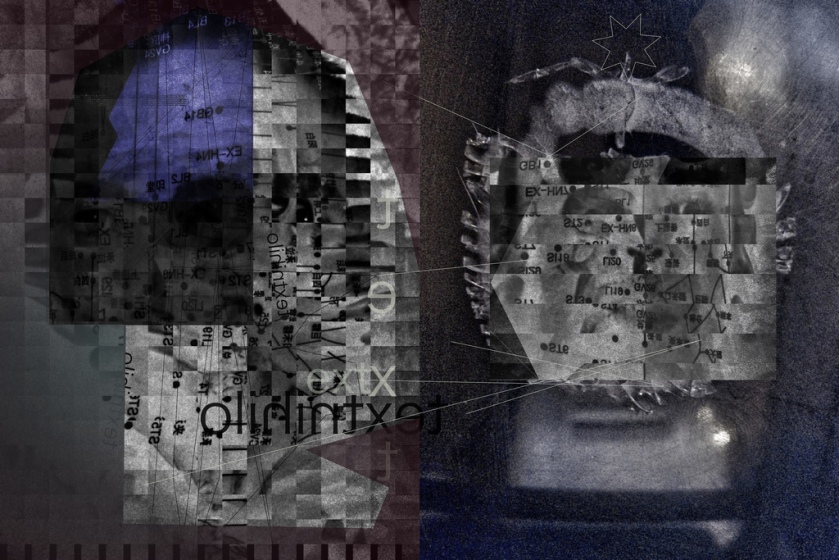 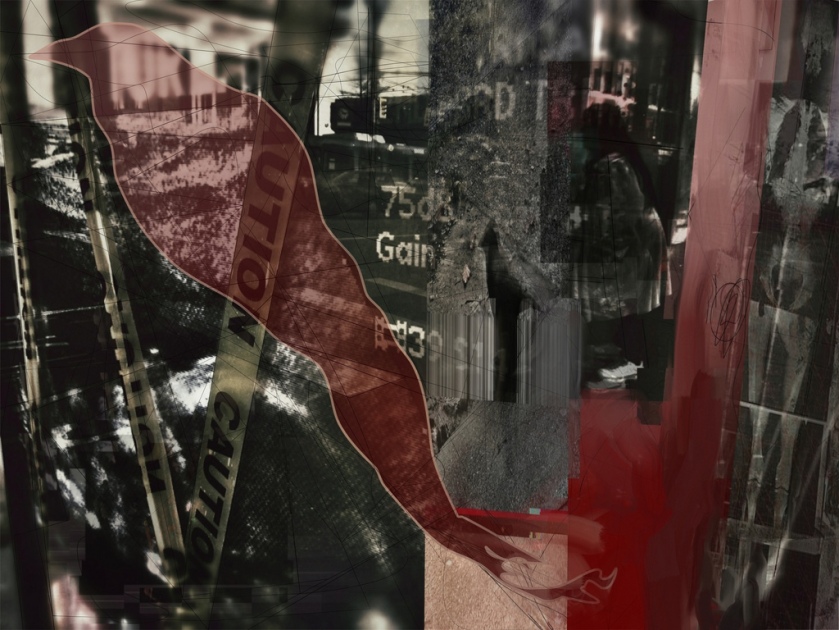 During some of the 80s and 90s, I worked in a shop producing retail signs for sales and general information. I became quite skillful and was one of the most productive employees. After a while, I got really bored with the repetitive work and decided to have a little creative fun on the side.

Using scraps and leftover materials, I started to discreetly make collage paintings on the side. There were lots of interesting, industrial materials to be used that were just waste from already made signs, such as adhesive-backed, vinyl lettering waste, different paints, stickers, papers and miscellaneous samples.

Now, this was not a sanctioned activity by the company so I had to be quite strategic on how I operated. I sometimes worked in this sign room all by myself but even when that was the case, someone could pop in at any moment to pick up finished signs, request new signs or just pick up other materials that they needed.

My strategy was to make every attack session on the art piece limited to under a minute. I didn’t really time myself but the risk of getting caught made me plan out my moves so that they could be done with a surgical-strike-force speed. This included getting out brushes, paint and putting them away in hiding places in the room. The art attacks were broad, brush strokes over adhesive vinyl scraps on paper. I sometimes had several paintings drying on the floor hidden under shelves. When they were dry, I might do a second or third attack. Some, I took home and worked into with acrylics or other materials.

Sometimes, other employees would come in to the room and wonder why they could smell different paints that weren’t part of the regular sign activity. I would just agree that I thought it was strange to smell that kind of paint and I would then get a deliciously dangerous feeling from my transgression. 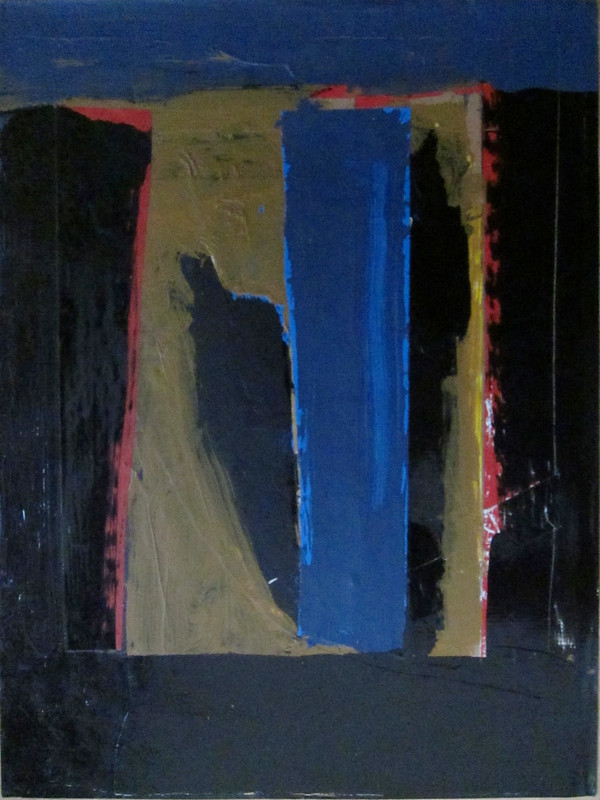 (for more in this series)